A poll conducted on behalf of the Coalition for App Fairness reveals that 84% of developers support a proposed antitrust bill aimed at reducing the market power of Apple and Google’s app stores.

The Open App Markets Act bill, currently before the US Senate Judiciary Committee, aims to remove Apple and Google’s ability to dictate app market terms, hurting app developers , competition and consumers. Its objectives are to:

The proposed legislation is welcomed by the Coalition for App Fairness (CAF), the lobby group formed in September 2020 by Epic Games when Fortnite was kicked out of the App Store – see Developers finally revolt against Apple. According to the CAF:

The Open App Markets Act would directly address monopolistic and anti-competitive practices by app providers. The proposal would also strengthen competition in the app market by preventing self-preference and enabling open communication between developers and consumers.

A letter signed by 20 CEOs, all CAF members, urging the Senate Judiciary Committee to pass the Open Apps Markets Act explains why such legislation is needed:

Fair and open competition is the engine of a well-functioning free market. But today, gatekeepers to the mobile app market are using a vice grip to control developers and impose terms and conditions that undermine competition, stifle innovation, limit consumer choice and drive up prices. They eliminate competition by preventing developers from using alternative methods of app distribution, then force developers to use their payment systems to extract excessive fees, limit competitors’ access to information, access treasure troves of developer customer data to create competing services and dictate how developers can communicate with their own customers through their apps, including prohibiting developers from informing users of lower prices outside of the app.

CAF also examined the attitudes and opinions of individual developers via a survey, conducted by ClearPath Strategies, which surveyed 190 app developers in 11 states between December 2021 and January 2022. This found that the vast majority of developers ( 86%) think there is a need for legislation prohibiting anti-competitive practices: 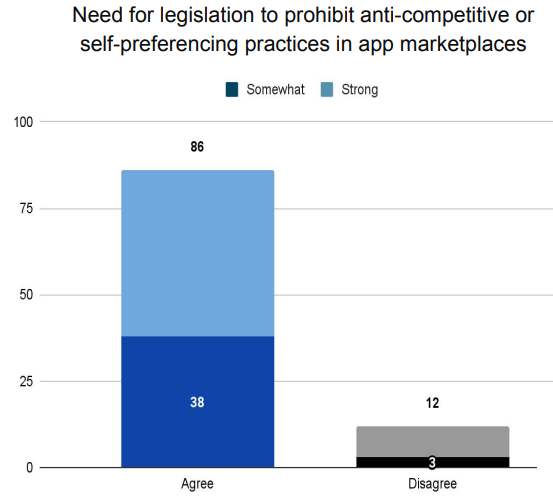 and almost as many support the Open App Markets Act: 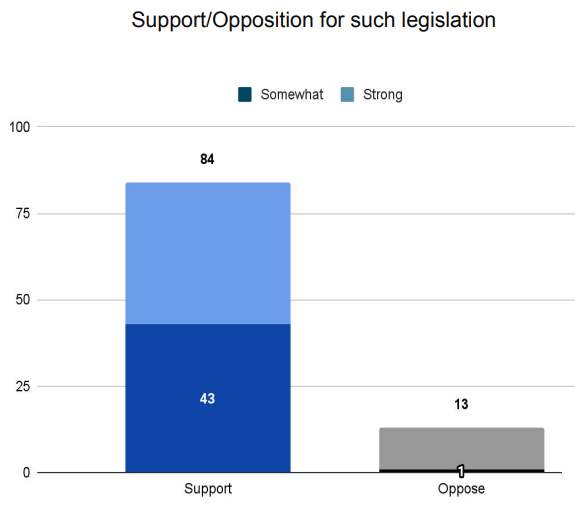 Apple and Google CEOs have personally pressured lawmakers to drop antitrust laws targeting their app stores, warning they won’t be able to verify the safety of apps downloaded from stores third. To counter this argument, security technologist Bruce Schneier wrote to the Senate Judiciary Committee, pointing out that Apple and Google are appealing to security questions simply to reinforce an untenable position. Schneier is a well-respected cybersecurity author and blogger and a fellow and lecturer at Harvard’s Kennedy School, as well as a board member of the Electronic Frontier Foundation and States in his letter:

It is simply untrue that this legislation endangers the privacy and security of users. In fact, it is more accurate to say that this legislation endangers the extractive business models of these companies. Their assertions about privacy and security risks are both false and misleading, and driven by self-interest, not the public interest. App store monopolies cannot protect users from all risks, and they often prevent the distribution of important tools that actually improve security. Moreover, the alleged risks of third-party app stores and “sideloading” apps pale in comparison to their benefits.

The idea that a computer is a closed device administered by corporations that, in practice, have no public responsibility other than their profit line is something that until recently would have been laughable. The desire to control what we own is not just something that applies to consumers and issues like the right to fix it, it is also a freedom that is fundamental to programming. What is a computer if it is not a freely programmable device? “A phone” is not a satisfying or realistic answer. 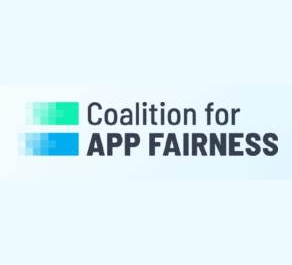 Developers finally in revolt against Apple

https://www.youtube.com/watch?v=KVnIYvDK05E Oakland News Now – 🔴 Erskine vs. App State – NCAA Basketball (LIVE BROADCAST) – video made by the YouTube channel with the logo in the upper left corner of the video. OaklandNewsNow.com is the original blog post for this type of video blog content. Watch live: https://ift.tt/3s6VZhU Start match: DES, 13, 2021 @ […]

The NFL Players Association will be releasing NFTs with DraftKings starting with the 2022-2023 NFL season. The non-fungible tokens will be available on the DraftKings NFT marketplace, which the sportsbook operator launched in July. DraftKings creates a fun aspect for its NFTs so that users can not only buy and sell collectibles for NFL players, […]

Xiaohongshu is sometimes described as “the Instagram of China” and is popular with Gen Z. It is following in the footsteps of TikTok and wants to build a global following, sources told Insider. The company is recruiting for positions that involve the development of its product internationally. Xiaohongshu, a popular influencer and shopping app described […]